SF Giggle of the Day

by Ken HoughtonThe penultimate list included a Nebula winner (Scarborough), a work that received an embarassment of awards in and out of genre (The Sparrow), a John W. Campbell Memorial Award winner (Slonczewski), and enough works that are very recent and well-known (Kushner x 2, Bull, Valente, Huff, etc.) that my friend Constance (who edited a work that is appropriate for the list and knows the history of the field) could legitimately note:

Very few of these are anything close to obscure. I still don’t get this.

Though, I am really pleased to find Katharine Kerr’s Polar City Blues on this list. Yet, it wasn’t published by a small, no-name press either.

How do you figure writers like Tanya Huff etc. are obscure and unknown? When their books are all on the shelves of all the chains still in operation?

Most of the clear gaffes are gone, and it's good to see God Stalk on the final list. But this is a list of "books I read when I was younger," not "books that have been forgotten."

If this is Feminist SF - The Blog's idea of "obscure" works, then I promise to pay attention to them again when I stop yawning.

We Own This on VHS, I think

by Ken HoughtonThe theme song to the show—at least as broadcast in the United States—was written and is sung by my favorite Christian Canadian.

So I have no idea what to make of this, spotted in Wal-Mart in La Salle yesterday: 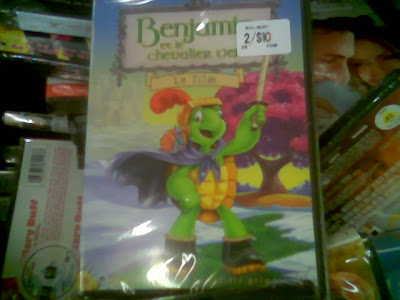 Yes, the title as shown is Benjamin and the Green Knight.

Rosie owns, and is very fond of, this which—save for the name of the title character—appears to be the same film.

I suspect "Hey, it's Franklin/Comin' over to play" won't make as much sense if you think the character's name is Benjamin.

ESPN Continues to Lie for the sake of...whom?

by Ken HoughtonAlthough ESPN is officially a, er, Sports Center that uses video, they appear not to be able to see themselves, judging by a paragraph in this piece:

Moore, then a forward with the Colorado Avalanche, suffered severe neck and head injuries in the March 8, 2004 incident, when Bertuzzi sucker punched him from behind, knocking him unconscious to the ice. Moore has not played professional hockey since.

As Joan Collins once observed, "A lie is a very poor way to say hello."

Long-time readers will know this is not the first time ESPN has told this lie. I'll say again what I said then:

Found the video on YouTube. No embedding, and not recommended for the faint of heart. This is a family blog.

ESPN's continued efforts to lie about this do it no favors.

by Ken Houghton"[N]ot...every violation of the law, is a crime." - Michael Mukasey, making it clear to the world that a Columbia education isn't worth jack.

by Ken HoughtonIt's a sad day when I'm thrilled about the Best Dramatic Presentation (Short Form) Hugo winner (and the winner HIMSELF showed up [7:52p]), and at worst indifferent to the idea that "semiprozine" will go away after next year.

I Spend Four Days in Canada and the World Changes

by Ken HoughtonDrek has invaded Scatterplot, starting with the claim that he can write posts "generally beneath the dignity of sociology."

In short, he's supposed to do for Scatterplot what I'm doing for AB.

I believe this only leaves Kim here. Or have I missed something with you as well?