Interlude 1b: How Cheap is the Market?

by Ken HoughtonVia Brad DeLong (who will get nicer comments from me when his continued attempts to defend the disingenuousness of N. Gregory Mankiw ease a bit, but who deserves to be read seriously no matter what), Barry Ritholtz and the folks at The Big Picture ask How Cheap is the Market?

The answer appears to be "cheap if you're really young" (though read through the comments and you'll see some healthy skepticism). The ancillary links, especially the fifty-year history, hint at a different story, though there are good arguments why the historic means might not apply. (See, for instance, Baker, DeLong, and Krugman here (PDF).)

This dovetails nicely with the long-awaited (by no one, to be certain) follow-up to this post, especially where the Big Pic dudes quote an Investment Advisor's article in Barron's:

Over 10-year periods, the major determinant of stock-price returns isn't growth in corporate profits, but rather changes in price-earnings multiples.

Don't get me wrong: Investment Advisors are people who only make money if people invest. But read the Whole Thing, which breaks down the data by decades.

The Bigger Fool theory may require more credibility than I was going to give it.

UPDATE: Barry Ritholtz, in Comments, points out the follow-up article, which leverages Robert Shiller's dataset and suggests that Greater Fools likely are not yet in the majority.

This seems a good time to reproduce the graphic from the post six weeks ago, borrowed Burton G. Malkiel (it was on page 257 of a previous edition): 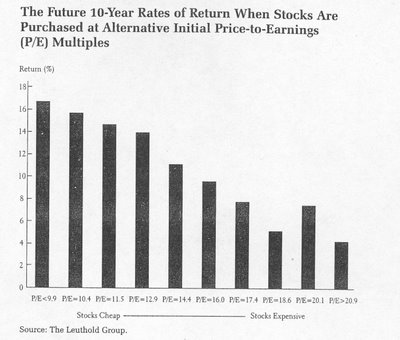 Comments:
I always take notice when a real economist write about financial markets!

I'm a total market indexer kind of investor, but I wonder if simply buying single-country ETFs with the lowest P/Es and selling the highest would make money.

I forgot to link:
countries by low p/e

You also must read part II, which looks at the question: Will Cheap Stocks Get Cheaper?

The answer is a likely yes.

The Headline Says It All
What it Means to be a Conservative Rocker
Four Weeks of Productivity Left
The NYTimes thinks its online readers are idiots
On the Enron Verdict
Reasons to be Tearful, Part Three
Internships: Pay Them or Leave Them?
Henry Paulson's turn in the barrel
Well, Vaporware *Is* Affordable
Holiday "Baby" Extra!